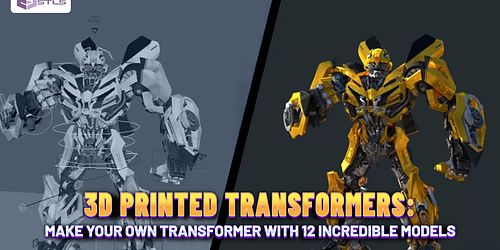 3D PRINTED TRANSFORMERS: MAKE YOUR OWN TRANSFORMER WITH 12 INCREDIBLE MODELS

Transformer is the iconic series of our childhood that young and older people would love to play with the characters and have them in real life. Have you ever wondered you can have your collection of 3D printed transformers easily?

Let’s find out and add some legends to your collection.

Transformers is a media franchise created by Hasbro and Takara Tomy, based in the United States that depicts clashes between sentient, living autonomous robots, most often the Autobots and Decepticons that can morph into cars and animals. Toy, animation, comic books, video games, and films are all part of the brand.

Nowadays, thanks to 3D printing, we can manufacture our variations and even accessories for them! Those models are a terrific alternative if you are searching for something cool to produce on your 3D printer because of the innovative style and the fact that Transformers are effectively two models in one.

So we had better check out the list below and create a great collection! If you attend to make a whole collection of transformer 3D models, Optimus Prime is the first one you need to print out. It may make a gorgeous 3D print of Optimus Prime, paint its brilliant colors, and put it on your shelf.

Optimus Prime is the commander of the Autobots and a renowned Cybertronian. Its fists, which are free of guns, cannons, and other weapon sets, are employed for good, heroic actions, and people's safety. His charm and selflessness make him a powerful figure.

You can find and download Optimus Prime transformers STL on the Internet with several choices. This renowned model comes in two versions: humanoid robot mode and truck mode. If you like Transformers and want your project to function, this fully articulated assembly model is a must-have. Optimus Prime, the Autobots' commander, is also featured in this "Masterpiece" model. Not only does it resemble him, but it also morphs! There's nothing quite like spending the time to create and build your changing Masterpiece!

This model will need some supports, and you'll need to take precautions to avoid warping (for example, printing slowly) so that the components fit together properly. Also, expect to devote a significant amount of effort to post-processing and building this model. Megatron is the most well-known and feared commander of the Decepticons, as well as the uprising's originator. He grew to believe in a noble purpose for his species as a youthful, charismatic leader molded-in conflict and the inheritance of war—it is the Transformers' magnificent destiny to control an empire that will span the universe. He despises other Transformers, believing that they dishonor their noble legacy by wanting peace and collaboration with inferior living forms. He is the polar opposite of his mortal rival Optimus Prime.

The Megatron head, torso, arms, weaponry, legs, and an optional platform will be among the assembly elements to print and paint. Fortunately, once you 3D print and assemble it, you will have a Transformers villain that is completely safe.

New heroes must rise in an epic battle to establish a future for all in the blockbuster Transformers: The Last Knight film. Sqweeks may be the tiniest of the Autobots, but his spark is just as bright. Despite its state of deterioration, Autobot Sqweeks persists in his mission to aid all living species.

An Autobot 3D print like this comes in multiple components that you'll need to put together after printing and painting. Even if you are new to the pastime, the end product will be pleasing. Soundwave (aka Soundblaster) is one of Megatron's most dependable soldiers, and he has established himself as an indispensable member of the Decepticon high leadership. Soundwave, while being Megatron's "sole" Communications Officer, sits at his side as a confidant, equivalent in rank to Starscream and Shockwave.

And if you want to create a support team for Megatron, it’s a better way to add Soundwave to your collection. You may get Transformers Soundwave 3D model STL files to print on some webs. Other than painting, Soundwave shouldn't require any post-production. There is no glue was required for assembly because the joints fit together securely, although your results may vary depending on your printer.

This model was inspired by Toyota Prius and the maker decided to have his transformer.

According to the creator: From a Prius to a robot, the figure morphs. Although the transition procedure is simple, it may be improved (such as hinges on the doors). Single and twin extruder files are supplied for two color components.

The majority of the joints are snap-together ball joints. To join the head, driver front, and passenger front components to the main body, you should use glue. Bumblebee has long been a transformer 3D model, because of his deep past and character arc involving a malfunctioning speech processor. Bumblebee's vehicle form, unlike in subsequent incarnations of the franchise, was initially a Volkswagen Beetle, for those unfamiliar with the original series.

Bumblebee is one of the Autobots' tiniest and weakest members. While his height lets him do his duties more effectively than other Autobots, he is self-conscious about his size. Perhaps this explains why he makes quick friends with humans. He looks up to the other Autobots, particularly Optimus Prime, but he is unaware that they look up to him as well. He may be little, but he is courageous, and he is one of the most popular Autobots. Bumblebee already has the admiration he seeks.

It's even better when you find a Bumblebee transformer STL file, you will discover that this one doesn't require any supports.

This model may require some adhesive and perhaps some sanding in post-production. But it will be worth it.

When you print the transformer collection, it’s better if you pair them with their weapons. On a 3D printer, you may build your favorite hero's renowned Optimus Prime sword, Megatron sword, rifle, or blaster.

With weapons, your collection will become more real like in the movie. Snarl is a gloomy, sad loner. He does his best to obey Grimlock's demands, but that's about it. He delegated the task of thinking to others. He has few opinions, and when he does, he rarely expresses them. Snarl's inability to communicate just adds to his sense of isolation. On top of that, he despises the Ark's ungainly stegosaur appearance and fears that the conflict on Earth would mean he will never see his beloved Cybertron again. Snarl is a miserable individual.

Snarl is only happy when he is fighting. Only the pleasure of conflict can wipe away his spark's anguish, allowing him to forget about everything but the mounting thrill of the fight. As a result, Snarl enjoys conflict even more than his fellow Dinobots.

Snarl's mold had a tiny variation later in the G1 series but otherwise remained substantially the same. However, one variant of G2 Snarl mimics the G1 version rather closely. Sky Lynx, unlike other robots, can transform into a shuttle and travel across space with passengers aboard. The character in the film can transform into both a flying bird and a walking lynx. For the Sky Lynx Transformer G1 turned into a space shuttle, the 3D printing add-on model includes an additional fuel tank and fuel boosters.

The classic Sky Lynx Transformers G1 3D printing model is among the numerous fantastic Transformers G1 STL files. Many fans of the franchise consider it to be the most stunning robot in the history of the Autobots.

Wheeljack is a fantastic figure for a variety of reasons, including his classic design. In comparison to his fellow Autobots, he has a distinct look as a Transformer. The cheek protrusions that light up as he talks are his characteristic design style, which is unique among Transformers. Rather than being an arrogant inventor, he's a renegade genius and tinker.

During his time as an Autobot, he performed several great things, like constructing the Dinobots. Unfortunately, his innovations would outlive him, as his character was slain in the animated 1986 Transformers film to make place for a new line of children's toys by the powers that be. Windblade is a Cityspeaker, a bot that can interact with Titans, bots the size of cities, via telepathy. She fights for what she believes in wholeheartedly, and she always attempts to use reason when everyone else has given up. When that doesn't work, she turns to her turbine-hilted sword Stormfall to put an end to the situation.

It’s look more perfect when you bring her to your collection!

Nowadays, We can make replacement components and replicas of our favorite toys and gadgets using 3D printing. The true benefit, however, is that we can now create personalized accessories and toys that have never been manufactured before!

You can make your own transformer character. Just have a transformer STL file, research the figure closely, assemble it carefully then you have a perfect model.

Have fun with your work!