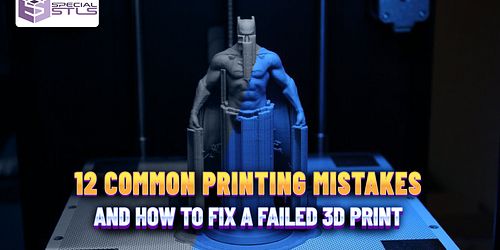 In 3D printing, you will have some trouble printing the item you want, at least once. 3D printing is useful and probably becomes essential in our life. But sometimes, this printing machine will not work as smoothly as you expected. Then the result might be messy.

After someone has failed 3D print, we found some common problems and basic ways to fix them to help you figure out where the thing goes wrong with your process. Let’s see what we have below!

WHY YOU GET FAILED 3D PRINT? Many reasons can cause a problem that makes your 3D printing fails. Extrusion failure is another typical blunder. Over extrusion occurs when your 3D printer extrudes too much plastic too quickly, resulting in a nozzle jam.

Besides that, one problem we usually have is failing when halfway through. It can be happened by a variety of factors, including incorrect exposure duration, an imbalanced build platform, insufficient support, poor adhesion, incorrect component orientation, and more. Resin has been tainted. The Optical Screen on the LCD is Too Dirty.

We had too many failed 3D prints or failed STL files that we have had to throw them away. Therefore, you will need to check this list below to identify if your 3D printing fails.

1. The print does not stay in the print bed Losing a print because it does not cling to the print platform is a typical problem that is generally simple to fix. That is aggravating when a 3D print breaks away at virtually any point, from the first layer to the last.

And that is not always the printer's fault, and if you have tried to print a model with only a little contact with the platform, there is the problem. It's therefore doubtful that you'll be able to print without some form of build plate adhesion and brim, and that's before you even consider supports.

Fortunately, because this is such a prevalent issue, there are several simple solutions.

The item was not only warped but also the warp was so severe that the PEI build surface stretched about the same distance as the aluminum bed screws from the aluminum build plate.

Although these build surfaces are flexible, it's likely that this part permanently damaged them, rendering both the part and the build surface faulty. Consider employing a more firm build surface, a heated chamber, and build plate adhesion methods to assist combat this issue.

3. The first layer is a disaster To someone new to the 3D printing field, you can’t avoid this problem and don’t give up yet because it’s a common one on 3D printing fails so you can find several ways to fix it everywhere.

The earliest layers of a print might be difficult to work with. It might be that the print simply does not adhere or that you're seeing undesired lines that give the bottom shell an odd appearance. Furthermore, any tiny detail on the bottom of your print has the potential to congeal into a blur with little resemblance to any surface design.

When you start printing, pay more attention to whether the nozzle is too far from the bed print or not. If it is, the bottom of your item will not be smooth because the first layer is a mess. And if it isn’t, there are blobs on your items. So try to level the print bed correctly, adjust the bed temperature.

4. The extrusion process was stopped in the middle of a print When your printer was halted in the middle of the process, you surely feel confused about what’s going on. The problem is either the nozzle itself or your filament supply goes wrong.

It might be as easy as the filament runs out. It's also possible that your extruder's idler is too tight, resulting in the stripped filament that isn't being fed into the hot end. Alternatively, you might have a blockage in your hot end, which prevents you from extruding any more filament.

5. The nozzle is not working Have you ever wasted too much time to figure out why your nozzle is not working? Nothing seems wrong but what you didn’t find out is that there may be the filament inside your nozzle.

If you want to fix that, take some notes: If your items get too many layers, you will have that problem. There appear to be a few concerns with the quality as the print develops. If you look closely, you'll notice that the layers aren't exactly aligned as they should be. When you look at the interior support structure, the pattern appears to be somewhat off. Rather than being smooth, the outside wall has minor misalignments that form an uneven face. It's very likely that the problem just affects one way of printing: front to rear or left to right.

7. The print is unusually weak/wrong-looking

Even though the print's external quality appears to be excellent, parts of it are missing or the final print is fragile and comes apart.

In the 3D world, you can simply intersect the two; they still exist as separate objects, but the software we use distinguishes them regardless of how similar they appear to us. To get the two objects to print appropriately, they must be merged such that any inner walls are eliminated, leaving an object with a single undivided interior cavity. Another typical reason is deleting one of the surfaces of an object such as a cube. You effectively have a hole in your thing; it may appear to be a five-sided shape, but it just exists in virtual 3D space; this is geometry with no physical form. The temperature of the environment can affect whether a photopolymer resin sets during the SLA printing process. If your resin is too cold, it will not set and, if it does, will set unevenly, leading to incomplete prints and poor plate adhesion.

Some resins may require temperatures as high as 25-30 degrees Celsius.

9. Layers are not bonding

Maybe you haven't properly positioned your print to prevent minima. These sections print separately from the rest of your print platform, causing them to detach, print sloppily layer by layer, and overall muck up prints. Don't even think about trying them. Ensure that all sharp angles and points not directly related to the main print at their highest point are supported.

Delamination can be caused by debris, improperly mixed resin, and ghosting on the vat itself, in addition to moving supporting sections. All of these issues are simple to resolve.

Additionally, following a successful print, delamination may occur during the post-processing stage. If your material has exceptionally poor layer bonding, washing it in IPA for an extended period may make the layers weaken, even more, causing the item to come apart. Some 3D models require support structures, however, the supports may be quite tall and brittle depending on the design. Simply by the activities of the extruder traveling along the top, they may tip over before they reach the section they were meant to support.

You should consider making your slicing tool's support structure more resilient, or reorienting your 3D model to lessen the size of the supports.

This is most likely one of the most prevalent reasons for a 3D print failing. 3D printers function by layering items together, and if the layers fall off the bed, you'll get plastic spaghetti instead of a neatly created component. Two factors influence bed adhesion: When your filament loops around itself and tightens to the point that it is no longer extruding, it is one of the most aggravating fails. The only solution is to: When changing filaments, make sure to keep the loose end securely in place while putting the spool back in the box, so it doesn't slip under itself.

There is no getting around the reality that trial and error is an inevitable element of 3D printing. Acceptance is simple, but dealing with failed 3D print is more complicated. It doesn't feel right to just throw them away so you should pay more attention to your failed 3D prints. Even if you have to spend a little money on recycling, the piece of mind that you're helping to reduce 3D printing's carbon footprint is worth it.