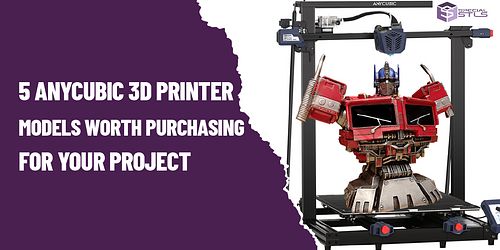 5 ANYCUBIC 3D PRINTER MODELS WORTH PURCHASING FOR YOUR PROJECT

If you want to find the best 3D printer under $400, Anycubic Vyper is the right choice. Right out of the box, the Anycubic Vyper ticks off a number of FDM must-have features. The automated bed leveling function is the most important feature for a printer in this price range. The Vyper has mesh leveling, so you won't have to struggle with adjustment wheels for a few hours to get it right. A filament runout sensor and a power-fail resumption mechanism are also included. You can continue your print without losing your work if your printer runs out of filament or the power goes out in the middle of a long print. The site area of the Anycubic is 245 x 245 x 260mm. The printer has a heated bed with a magnetically connected surface made of spring steel. The bed's surface is stippled, which helps in the attachment of things to the bed. Under the hood of the Vyper, there are some new smarts. Filament run-out detection, power interrupt detection, and auto bed leveling are often reserved for higher-priced printers, but that trend is shifting in the right direction. The Vyper's auto bed leveling technology is fantastic, and it's not something that every brand gets perfectly. All of these improvements turn the Vyper become more than simply a clone; it's a fantastic machine in its own right. And according to many Anycubic reviews, this Anycubic Vyper 3D printer gives good quality prints.

Summary, automatic mesh bed leveling, a filament runout sensor, and a power-fail resumption are all features of the Anycubic Vyper. It features a flexible steel build plate that can be removed, and it prints well. Anycubic's Mono X is the latest contender in the competition to be the best large-budget resin 3D printer. The Mono X offers huge prints and lightning-fast layer cure times at high quality with a build volume of 192 x 120 x 245 mm and a 4K monochrome screen.

The Photon Mono X from Anycubic is a cutting-edge MSLA 3D printer. It meets all of the current resin 3D printing trends, with its big build capacity, 4K screen, and monochrome display. The Anycubic Mono X is capable of generating high-quality prints with minimum effort, thanks to its attractive metal body and intuitive user interface. The Mono X features an 8.9-inch monochrome LCD as its centerpiece. Monochrome screens have quickly become the new standard for current MSLA 3D printers. Faster curing times, less energy usage, and a longer lifespan than previously utilized RGB screens are only a few of the advantages. UV light in RGB screen printers is virtually underutilized since the LCD filters out the majority of it, lengthening each layer's curing time and causing the screen to deteriorate quicker. Mono screens can reduce cure periods from 6 seconds to 1.5-2 seconds per layer due to their superior (UV-) light permeability. Anycubic printer gives the user-customizable intensity control for the Mono X and recommends lowering the UV-light brightness to 70-80% to extend the longevity even more.

For many people, these economical mid-sized resin printers will be game-changers. Because you can print a resin model that is equivalent in size to an FDM printer, you can make prints with significantly more detail without having to chop them up first. The Mono X is an excellent choice for this market. Anycubic 3D printer is a printer brand recognized for its low-cost 3D printing and excellent quality for the price. The Anycubic Mega-S is one of those machines that can be relied upon to produce consistent, high-quality prints with minimal mistakes and ease of use. This 3D printer has maintained its dominance in the low-end industry by introducing new features at a cheap cost. The i3 Mega Printer has been updated to the Anycubic Mega-S.

It now has a mechanical filament sensor that can detect when your filament is running low automatically. Flexible filament will be handled by the newly developed extruder. Other important functions, such as power recovery loss, have also been included. The Anycubic Mega S 3D printer's large base nonetheless has a full-color touchscreen and a robotic mascot that bears an uncanny similarity to the superhero Iron Man. The Anycubic Mega-S, like its predecessor, has a construction volume of 210 x 210 x 205 mm. The initial layer of each print is applied to the acclaimed Anycubic Ultrabase heated bed once more, ensuring that the prints adhere to the bed and pluck cleanly when the work is over. Anycubic's flagship 3D printer now arrives semi-assembled, which is a welcome feature for novices and makers who don't want to construct a kit from the ground up.

The Anycubic Mega S is a wonderful pick for someone getting started in 3D printing because of its affordable pricing, huge build area, and good print quality. The assembly is straightforward and might be a fun project. To increase use, the manufacturer has added a suspended spool holder to the side of the 3D printer, as well as relocating the filament sensor. However, it should be used with caution by children. Though Anycubic 3D printer i3 Mega was manufactured in 2018 but this 3D printer has been still worth purchasing.

The Anycubic 3D printer is 405mm in height by 410mm wide by 453mm deep, or around 16 inches by 16 inches by 18 inches, and weighs around 11kg (24 14 pounds). It's the perfect size for desktop storage and use. The maximum print size is 210mm by 210mm by 205mm, or approximately 8 14 inches by 8 14 inches by 8 inches. Not the world's largest completed items, but perfect for action figures, jewelry, or components that need to be snapped together as a whole.

The printer's frame is made of sheet metal, which provides the stiffness required for frequent usage. After six months of producing your new line of plastic space army men or interchangeable watch bands, this won't break or warp. Its printing bed is built of a revolutionary Anycube composite that warms up rapidly and evenly while printing and cools down quickly, allowing you to snap off your finished product with ease. This comes semi-assembled, which means you'll have to assemble the frame and printing bed using eight screws and three wires (included in the package) before printing your first print. This printer's layer resolution ranges from 0.05 to 0.3 mm, giving you a sense of the amount of detail you may expect. The thickness of each layer built by the printer while creating your product is referred to as layer resolution. Even if you pick the thickest setting, the i3 Mega's range is considerably below the typical size of 0.4mm, so you'll get insanely amazing details.

Fused deposition modeling is utilized in printing. This is how filaments are fused together in the printing process, so if you've done any 3D printing before, you'll be familiar with this printer's procedure. The Anycubic Kobra Max is most likely the printer you're searching for if you need a large-format FDM 3D printer. It offers a large construction volume, a good list of features, and reasonable pricing, making it ideal for prop builders. If you've seen the Anycubic Vyper before, the Kobra Max will appear familiar, although larger.

The Anycubic Kobra Max is a feature-rich 3D printer with a lot of capability targeted at the prosumer market. The extruder has a filament run-out sensor and a dual-gear filament motor with adjustable tension. The hot end has a tiny LED positioned beneath it and has a 0.4mm E3D Volcano-style nozzle, making it easy to observe pieces as they print. The hardware construction of the Kobra Max is restricted to attaching the Z-axis stage to the base and connecting all of the wire terminals, which can be done in under an hour. The Volcano 0.4 mm nozzle that comes standard with most 3D printers are included with the Kobra Max. Given the printer's large build capacity, having a 0.6 mm nozzle as a standard option or a spare in the box would have been preferable, as it would have increased print speed and allowed for higher layer heights. The time it takes to print a complete volume model with a 0.4 nozzle will be measured in weeks, not days. So, if you're thinking of getting a Kobra Max, don't forget to get some bigger nozzles as well.

The Anycubic 3D printer Kobra Max's primary user interface is a 4.3" color touchscreen that is bright, snappy, and packed with helpful information. The Z-axis offset may be modified in small increments while printing (a feature known as baby-stepping), which is handy for modifying a print on the fly. During printing, the LCD also displays a progress indicator that may be used to estimate the amount of time left on a print.

So if you need to print something big, Anycubic 3D printer Kora Max is your go. Anycubic has been a pillar of the hobbyist 3D printing market for years, producing high-quality printers. Anycubic 3D printer is worth being on your list when you have to find a good 3D printer. Besides the list, there are many printers you may consider depending on what your goal is. Hope our information can help you a bit!

In addition to the aforementioned Anycubic 3D printers, you can refer to: Best 3D printer under $1000