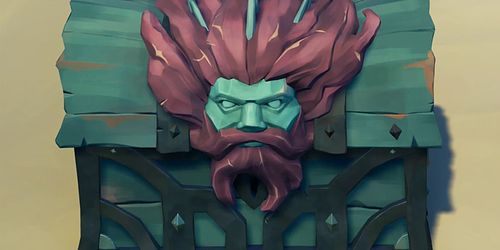 Sea of Thieves is one of the most brilliant games you could find on Steam. And the signature item that could give you the most uncomfortable love-hate feeling ever - Chest of Sorrow is now available in 3d Printing!

I. How can I 3D Print Chest of Sorrow? It’s not that hard, but I will show you a simple guideline to create your own 3D Printed Chest of Sorrow

II. What is Sea of Thieves game all about?

Everyone's version of the ultimate pirate fantasy is different. Perhaps it entails you and your crew looting the ships of would-be explorers as you wreak havoc throughout the seas in pursuit of lost ships and buried gold on a journey to become a legendary pirate to challenge Jack Sparrow, or simply singing shanties with a pet monkey. Whatever style of piracy you prefer, Sea of Thieves' remarkable open-world sandbox allows you to do it all while making even the most mundane moments enjoyable. Sea of Thieves is a 2018 first-person action-adventure game developed by Rare and published by Microsoft Studios. Players explore an open world aboard a pirate ship in this game. The game is billed as a "shared world adventure game," which implies that groups of players would meet up on a regular basis during their travels, sometimes forming alliances and sometimes going head-to-head. In order to become the ultimate pirate legend, the player adopts the character of a pirate who completes expeditions from various commercial firms. To become a Pirate Legend, players must reach level 50 with three different trading enterprises.

It's crucial to note that, although being a shared-world online adventure game, Sea of Thieves is not an MMO with a persistent environment. This means that every time you log into Sea of Thieves, you'll be given a brand-new ship in one of three classes based on the size of your crew – Sloop (up to two players), Brigantine (up to three players), or Galleon (up to four players) – and everything will be reset except your long-term progression goals. Everything you gathered the last time, the row boat you discovered, the storage boxes you conserved — it's all gone. The Chest of Sorrows is a very rare treasure in Sea of Thieves, however if discovered, players may be intrigued as to what it can be used for.

When you uncover a chest in Sea of Thieves, it'll almost always be a standard wood box. However, every now and then, you come across a unique cursed treasure that necessitates a bit more effort. The crying chest, also known as the Chest of Sorrow, is one of them. You'll rapidly learn that if you don't know how to soothe its cries, they'll quickly fill your boat and sink it. Here's all you need to know about Sea of Thieves' crying chest, including how to transfer the Chest of Sorrow properly. As most Sea of Thieves players know, if this happens while the Chest of Sorrows is on a ship, things can quickly get dicey. Playing music won't make it go away, and rowing in a moored rowboat won't help. To put it another way, there's no easy method to prevent the Chest from flooding a ship, and in the worst-case situation, the Chest will just take it down into the murky depths.

2. Where can I find this crying chest?

The chest can be found in a variety of ways. They can locate them on islands, in shipwrecks, skeleton ships, or by slaying a Kraken or a Megalodon, for example. It's a rare occurrence, but with so many different ways to find chests, gamers are likely to run upon one sooner or later.

At The Reaper's Hideout, players can get a lot of gold by selling a Chest of Sorrow to either a Gold Hoarder or The Servant of the Flame. It generally sells for 3,000 to 3,500 gold, but it can sell for 7,500 to 8,750 gold at emissary rank V for either Gold Hoarders or Reaper's Bones. However, this is a chest that players should keep a watch on because it will start crying at random intervals. It will cause the ship to fill with water and possibly sink if it is on a ship. Because the length of its sobbing periods and the time between them are unpredictable, it's better to keep it close by.

There are a few things you can do to keep the ship from filling up with water. Pick up the chest when it starts sobbing and climb up the ship's side ladder. Sloops are a little difficult because the player must go as near to the water as possible while avoiding falling off. This strategy is most effective when used in groups of two or more. Even though single players must bail water, they can still steer when necessary.

3. What should I do with the Chest of Sorrow in Sea of Thieves?

Sea of Thieves players must be prepared to keep their ships from sinking if they want to use the Chest of Sorrows. Along with having buckets on available, crewmembers can keep an ear out for the Chest's unique cry and purge water as needed by storing it nearby above deck. Having a crew member carry the Chest on the side ladders is an effective approach to entirely neutralize the Chest's effects. The Chest of Sorrows may be a very irritating item for an enemy ship in combat. Because the Chest will sink any ship it is on, a cunning crewmate may easily get it aboard an enemy ship. Of course, in Sea of Thieves, utilizing any form of cannonball will make the procedure much easier, but when employed correctly, the Chest can sink ships without firing a single shot. This is especially useful when dealing with Skeleton Ships, which they can't get rid of.

4. How to stop Chest of Sorrow from crying?

You'll notice that a Chest of Sorrow is crying after you find it. Those tears, however, aren't just for show. They're sincere, and if you don't figure out how to calm the wailing chest, it'll quickly flood your boat. Fortunately, there is a way to prevent the wailing chest from flooding your ship; however, don't be too disappointed if you didn't find it out on your own; it isn't that clear. To stop the Chest of Sorrow from crying, play it a sad tune once you've secured it onboard your ship. To do so, go to your menu and select the concertina (which looks like an accordion) or the hurdy-gurdy (looks like a strange violin). The chest will occasionally cease responding to the music entirely. I'm not sure if this is a bug or a strategy to encourage teamwork, but if it happens, simply assign music to another person and it should stop crying.

When you start playing music, make sure it's a minor key tune with a slower tempo to keep the chest from sobbing. If a quicker song begins to play, simply let off of the play button and press it again to switch tracks.

The disadvantage of hauling a Chest of Sorrow in Sea of Thieves (apart from the risk of flooding your ship) is that it disables one of your crew members. Someone must stay with it and play music for the duration of the journey to an outpost, or it will begin to cry again. The melody may also be carried by the wind, alerting other ships to your location.

The positive is that you can get a lot more money for this treasure than you would for a regular chest. 3D printing is increasingly being viewed as a cost-effective and sustainable method for developing prototypes and tools for various manufacturing projects and processes. Obtaining prototypes has traditionally been time-consuming and expensive, necessitating reliance on third-party producers. Companies can use 3D printing to swiftly produce units of an object, tool, or prototype in-house.

3D printing is now more approachable to novices than it has ever been. Many people used to think of 3D printing as something that was out of reach for the general population, but that is changing, and for good cause. While perfecting your prints and technique takes time, learning how to 3D print is a skill that can be learned.

As we can see, 3D Printing is changing the way we enjoy our passions - everything we want is ready to be printed - let alone Chest of Sorrow.