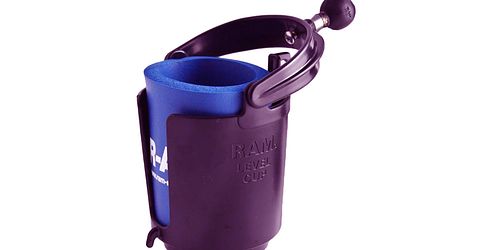 3D Printed Gyroscopic Cup Holder: Nobody asked for, but everyone needed!

Cup lovers! This is the signal for you to make your own cup holder in variety of cups including: Gyroscopic Cup holder, Greedy cup even …Hufflepuff horcrux with 3d Printing Technology

You love cups? You want to create something that is remarkable to fulfill your joy of collecting cups? Then 3d Printed cup is the way! Just let your creativity bloom like there are no limits.

1. What is a Gyroscopic Cup Holder?

Remember that innovative automobile cup holder from a few years back that allowed you to drive like a crazy without ever having to worry about spilling your drink? You can now make your own a 3d Printing version that's compatible with practically every car on the planet, as long as it already has cup holders. This intriguing marketing for a gyroscopic cup holder was launched in April 2014. The technology uses a gyroscopic phenomenon to ensure that your drink never spills no matter how much the automobile moves around.

The Hungarian team behind the innovation had barely raised $100 of their $8000 goal after the Indiegogo campaign concluded in June. Which is a shame, because the mechanics behind it are fascinating to see in motion, even if you could just put a cap on your drink. We believe it'd also be rather enjoyable to swerve the car about in an attempt to outwit the system, until the ultimate cleanup is necessary once you've managed to spill your drink. "Balancing luggage, a snack, personal things, and a drink can be challenging for travelers, sometimes resulting in spilled liquids when walking or seated on, for example, a plane or in a car."

The method is made possible by a device known as a gimbal. A gimbal, in essence, allows an object to remain upright while the gimbal itself is moving all over the place. You've probably seen a gimbal in action if you've ever seen the Steadicam technology that allows a cinematographer to move swiftly while keeping their camera completely stable. Because plenty of Car Business are trying it on their models!

BMW has previously installed a new technology that uses a gyroscope and adjustable cup holders to ensure that you don't spill your drink while driving. They are not yet available in production automobiles, however they can be found on the BMW Vision M Next, according to Cars Guide. The idea, which is designed to show us how BMW hopes to blend its historic history with the future, has a lot of cool technology on board, including these clever cup holders. Speaking about these next-level holders, Jose Alberto Casas Peña, the designer of the futuristic-looking M concept said: “basically, you put your cup in there and if it feels the car turning, the cup holder pushes it the other way, so the drink doesn’t spill and mess up your beautiful interior.” To be honest, I could’ve used that feature a long time ago, on several occasions. It’s nice to have heated and cooled cup holders in modern BMWs, but this takes things to a new level.

Ford was granted a patent for a self-leveling cup holder, or "vehicle beverage holder assembly," as the patent poetically describes it. The system's only purpose is to keep a drink from spilling as the vehicle accelerates, decelerates, or turns.

The gimbal in Ford's case is housed within this innovative cup holder design. The gimbal keeps the beverage stable when the automobile slams on the brakes or dives into a corner. Dirt and other debris can get lodged inside the assembly if there is a cover around the edge of the cup holder.

Pythagorean cup (also known as Pythagoras cup, Greedy Cup, Cup of Justice, Tantalus cup, or I koupa tis dikaiosynis) is a practical joke device in the shape of a drinking cup attributed to Pythagoras of Samos. When the cup is filled beyond a certain point, a siphoning action occurs, causing the whole contents of the cup to drain through the base. It's possible to utilize the cup to teach about greed.

2. The Pythagorean Cup's Origins: A History of the Prank

Pythagoras of Samos, according to legend, is to blame for the cup's design.

The cup is thought to have been initially used in the mid-6th century BCE during Pythagoras' lifetime, between 570 and 495 BCE. Pythagoras, according to legend, created the cup to punish his pals for being greedy and overfilling their wine cups. In allusion to this story, it is also referred to as the "Greedy Cup." It's also likely that Pythagoras intended the cup to serve as a warning to drink responsibly. If the liquid level in the cup is below a certain point, you can generally drink from it. If you pour above that level, however, the liquid will drain completely. Whether it was intended as a form of punishment or a lesson in drinking properly, there is little doubt that it had an impact. The Pythagorean Cup's fundamental design has inspired people all across the world, and it is still a popular practical joke.

Following Pascal's theory of communicating vessels, as the cup is filled, liquid rises through the second pipe to the chamber at the top of the central column. The cup performs normally as long as the liquid level does not rise above the chamber's level. If the level climbs any higher, the liquid will pour out of the bottom of the chamber and into the first pipe. The central column then generates a siphon, forcing the whole contents of the cup to be poured through the hole at the bottom of the stem. The majority of modern toilets work on the same principle: when the water level in the bowl reaches a certain level, a siphon is formed, which empties the bowl.

4. Prank Your Friend by Making Your Own 3d Printed Pythagorean Cup! If you wish to join in, the old tradition of having your friends spill their drinks all over themselves is waiting for you. Pythagorean Cups can be made in a number of different methods at home. Why bother getting one from an online store when you can receive one for free? Make your own Pythagorean Cup and see what you come up with!

III. Potterhead and the Hufflepuff Horcrux

1. What’s so special about the Hufflepuff’s Cup?

"Remember the cup's small and gold, it's got a badger engraved on it, two handles —"

Helga Hufflepuff, one of the four founders of Hogwarts School of Witchcraft and Wizardry, produced Hufflepuff's Cup, a magical artifact. It was a little golden cup with two well crafted handles and a badger carved on the side, as well as a few gems. The badger is Hufflepuff House's symbol. The cup also has the dubious distinction of being the only thing known to have been taken from a vault at Gringotts Wizarding Bank (particularly, the vault of the Lestrange family). 2. History of The Hufflepuff’s Cup

Helga Hufflepuff, the famous Founder of Hufflepuff House, designed the cup. A brilliant golden cup with two well worked handles on either side and a badger carved on its surface was reported. The cup was claimed to have a variety of magical abilities, though the nature of those abilities is unknown.

The cup may have been the first dining utensil at Hogwarts to assist in the magical conveyance of food from the House-Elf Kitchens, as Hufflepuff was outstanding with food-related charms and with house-elves. The cup remained in Hufflepuff's possession until her death. Riddle, or Lord Voldemort as he was known at the time, used Smith's murder to change the cup into his fourth Horcrux. Many years later, he entrusted it to Bellatrix Lestrange, his most faithful Death Eater. Lestrange treated the cup with utmost attention, placing it in her family vault at Gringotts Wizarding Bank, which was thought to be impossible to loot, while not knowing it was a Horcrux.

In addition to the bank's elaborate security systems, it was guarded by a spell that caused any object touched by anybody other than the vault's owners to multiply exponentially. A protection curse was also placed on the vault, causing the objects to glow like fire and burn the flesh of anyone attempting to remove them without permission. As you can see, with 3d Printing Technology - you have a lot of choice of creating your fancy cup whether it is an innovative Gyroscopic Cup; a memorable prank with Greedy Cup - or let your Potterhead sparkle with fantasy about the Hufflebuff’s Cup.