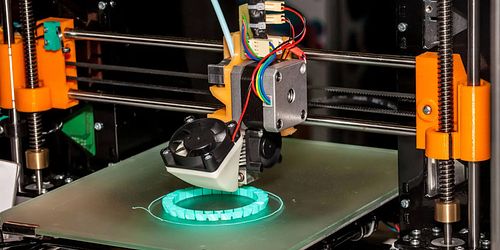 Best Budget 3D Printers on the Market: Good and Affordable

Cheap 3D printers are devices of great interest to many people and many different objects and uses. Should we choose the best budget 3D printers?

The commercialization of 3D printers has led to a dramatic increase in the number of machines available but, above all, strong price competition. It is now possible to buy the best budget 3D printer for about $100. It's now easier than ever to own a desktop 3D printer and get started with little to no cost. However, with so many cheap 3D printers on the market, which should you choose? We've selected machines, mostly FDM and SLA, for low prices (under $500), ranked in ascending order of price.

I. The benefits of 3d printing ●     Creative design and freedom to customize.

●     Borderless on Shapes and Geometry.

●     Can make all kinds of raw materials This is one of the best budget 3d printers that we can't help but include in the list of cheap 3D printers is XYZprinting. With over 20 3D printers, we chose da Vinci Nano, a desktop FDM solution launched in 2017. Based in Taiwan, XYZprinting developed this 3D printer compatible with the company's proprietary PLA and PETG filaments. It has a limited print volume of 120 x 120 x 120mm, a weight of 4.7kg, and an included housing that enhances security while preventing part distortion. The Da Vinci Nano has a speed of 70mm/s in printing, which is compatible with the XYZmaker Suite software, and accepts STL, 3w, obj, 3mf, and more formats. You can buy this machine for $199.95 from the manufacturer's website. The Voxel Aquila 3D printer is based on FDM technology. This printer is compatible with standard thermoplastics, such as PLA, ABS, or PETG. The machine offers a 22 x 22 x 25 cm print build volume. This machine is easy to use, according to the manufacturer, it will operate very quietly during printing, with an estimated sound of about 50 decibels. Aquila is specifically aimed at 3D printing beginners and aims to introduce them to the technology. It works with Cura, Simplify 3D, and VoxelMaker software and, like many 3D printers, supports STL and OBJ formats. The machine is sold for 160 euros on the manufacturer's website, excluding shipping. You may have heard of the Anet A8, a kit 3D printer that is easy to assemble and use. Measuring 220 x 220 x 240 mm allows all beginners to learn about 3D printing quickly. We can also mention one of the Anet ET range, the Anet ET4 model is one of the best budget 3D printers of AnetAnet launched in August 2019. It has a fiber end detection system, a touch screen, and a more extensive print volume of 44 x 34 x 48 cm). The Anet ET4 machine starts at the price of $189 on the manufacturer's website, or about €167. A favorite among the best budget 3D printer connoisseurs, the Monoprice Mini Delta V2 3D Printer starts at $199.99. And as you might have guessed, the V2 is an update to the company's already popular Mini Delta, taking into account customer recommendations. Some cool features include an adaptive touch screen with an updated and simplified user interface. Besides, the company also notes that it has updated its auto-leveling system to make it quicker to launch. Of course, users can still expect much-loved features from the previous version, including USB Connections, compatibility with Cura or open-source software, and compact size. This machine has the build volume of 11 x 12 cm. Moreover, it is compatible with PLA, ABS, Wood Fill, Copper Fill, Steel Fill, and Bronze Fill and can print at 170mm/s. Anycubic is one of the best cheap 3D printer manufacturers. The manufacturer recently introduced Mega X, an FDM solution that can produce 30 x 30 x 30,5 cm parts with a suggested print speed of 60 mm/s. However, the focus will be on its Photon flux, which is dependent on light curing. The Photon Mono is one of the most affordable, which incorporates a monochrome LCD to design models measuring 13 x 8 x 16,5 cm. Exposure time of this printer is reduced to one second, and the manufacturer claims their screens are four times more durable than regular LCDs. Photon Mono costs $199 on Anycubic's website or 175 euros. Creality is one of the most famous companies to provide cheap 3D printers. It has several models working with different production technologies, and this time we want to highlight three of them. The first and most economical is the Harlot ONE, a plastic 3D printer based on LCD technology. With a 127 x 80 x 160 mm print size, the machine can be purchased for as low as a price of $229. And one of Creality's most popular solutions is the Ender 3v2, which is capable of printing with a wide range of media, such as ABS, PLA, and wood, with a print volume of 30 x 30 x 40 cm. The latest CR line launched by Creality is priced at $479 more. You may have heard of QIDI Tech, a Chinese manufacturer of plastic FDM and LCD 3D printers, as its X-Pro printer is often listed as one of the best budget 3D printers on the market. It is known for Turbofan blowing on all four sides, dual extruder, removable plate, and breakpoint printing. Notwithstanding, we also wanted to draw your attention to another of the company's FDM printers that are gaining popularity on sites like Amazon, the X-ONE2 single extrusion 3D printer, priced from $249. In this machine, QIDI points to features such as an all-aluminium frame that offers more stability than plastic and a beautiful colorful appearance. In addition, it shares features with its sibling, the X-PRO, including an integrated turbofan engine that circulates air around the nozzle, a heated, stable print layer. And user-friendly slicing software. TEVO company is a Chinese manufacturer that develops affordable 3D printers for all manufacturers and 3D printing enthusiasts. And one of its most popular 3D model printers is the TEVO Tornado, a desktop that offers a generous print volume of 30 x 30 x 40 cm for its price tag (about € 290). It is almost fully assembled and is compatible with most plastic fibers, including ABS, thanks to the presence of a heating plate. Besides, the TEVO Tornado has an aluminium frame that ensures stability, and the E3D extruder can reach temperatures of 260°C. Mars 3 of Elego is the latest 4K LCD printer in the Mars line of Chinese manufacturer. Compared to its predecessor, Mars 2, Mars 3 is said to have 30% higher printing accuracy. With an installation space of 14,3 x 89,6 x 17,5 cm, the Elegoo Mars 3 has a larger print volume than other 4K resin printers. The device also scores thanks to its onboard chip (COB) light source and improved cooling system. Sandblasted construction plate ensures the models stick tight and don't fall off prematurely. Mars 3 is available in the market for 349 USD. Bonus: CHITUBOX Pro Slicer software is included in the purchase price. Founded by a group of Taiwanese 3D model printing enthusiasts in 2016, Phrozen offers desktop and professional 3D printers. After the success of the first LCD 3D printer, called "Phrozen Shuffle", they created a new generation of LCD 3D model printers, the Sonic series. In this line, the Sonic Mini 4k stands out. With an accuracy of 35 microns, the 3D printer takes one to two seconds to cure a layer. Featuring a 6.1-inch monochrome LCD, the Sonic Mini 4k has a print volume of 134 x 75 x 130 mm. If you're interested in the machine, its price is around $349.99. Polaroid is an American camera company that has also developed a 3D printer called Polaroid PlaySmart. Launched in 2019, it offers 120 x 120 x 120 mm print volumes based on extrusion technology. PlaySmart can print 3D model with three different materials: PLA, P-Wood, and PETG equipped with a WiFi camera. The 3D printer allows users to view the printing process live. The printer is also very small, measuring 30 x 27 x 32 cm and weighing only 1 kg. It is designed for beginners and 3D printing enthusiasts, the Polaroid PlaySmart costs €375. This is the latest desktop machine from Czech manufacturer Prusa, known for its Prusa i3 mk2 and mk3s. With the Mini+, Prusa wanted to provide users with a solution that offers the same features as previous models and is available at a lower price. Based on the FFF process, Original Prusa Mini+ has a print volume of 180 × 180 × 180 mm and prints with layer thicknesses from 0.05 to 0.25 mm. The machine combines interchangeable nozzles and a color LCD, which can be purchased as plug & play (from €419) or as a set (from €379). Finder 2.0 by Chinese manufacturer FlashForge is designed for 3D printing beginners and educators. The 3D printer is also designed for children and includes a removable print tray for easy cleaning. This FDM printer creates biodegradable PLA objects and has a build volume of 140 x 140 x 140 mm. It also features WiFi connectivity and auto-detection when scrolling is done. The printer has 50-micron accuracy and automatic calibration. In addition, it is available on the manufacturer's website for $349.

14. The Sidewinder x2 from Artillery A new version of the Sidewinder x1 is the Sidewinder x2 - a 3D model printer from Chinese manufacturer Artillery based on the FFF process. The 3D printer, pre-assembled, offers a print volume of 300 x 300 x 400 mm. With speeds up to 150 mm/s, the machine provides layer thicknesses from 0.1 to 0.35 mm. The nozzle temperature can be up to 240 degrees Celsius. Compatible with filaments from other manufacturers, the Sidewinder x2 sells for $469. The manufacturer also offers other the best budget 3D printers in its lineups, such as the Artillery Genius and Genius Pro. Magis by Dagoma is the latest version of the French manufacturer's delta 3D printer. It is even easier to use than its big sister, still with this single button system that allows start, stop, and resume printing. It offers 180 x 200 x 200 mm print volume and 100-micron accuracy. It still incorporates a fiber end detection system and automatic plate calibration. More than 50% of the small desktop parts are 3D printed. You will find it on the market for 499 €. Developed by Bresser, a German technology tool manufacturer, the Bresser REX 3D printer is aimed at those who have already started 3D printing but especially those just starting. The machine operates on the FFF process with a 150 x 150 x 150 mm print volume. According to the manufacturer, equipped with a heated and flexible printing plate, the Bresser REX will be easy to use, especially thanks to the intuitive touch screen. The 3D printer offers 0.1 mm printing accuracy compatible with PLA and ABS. Moreover, Bresser commented that thanks to the compact size, the size of the machine is 400 x 380 x 405 and the relatively lightweight, exactly 9 kg so that it can be installed in many different places. Finally, thanks to the HEPA filter built into the 3D printer, the surrounding air is guaranteed to remain clean throughout the entire printing process. For those who want to buy the Bresser REX, the manufacturer sells it for €489.

The above are the best budget 3D printers that we evaluate and believe will suit your budget. Each type of machine has different features, so consider choosing the right product depending on your budget and purpose of use.