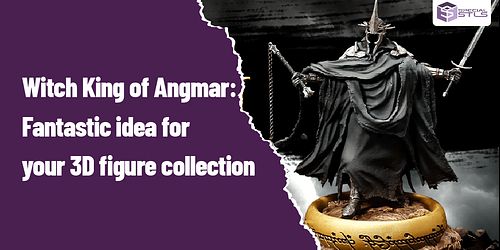 Every movie character is an endless inspiration for 3d model printing. The Witch King of Angmar from The Lord of The Rings is one of the most iconic action characters in this universe. Characters created by this famous publisher become impressive 3D printing toys and collectables. There are many great Witch King 3D printing models to craft, and each one deserves your attention. If you are curious about this, let's read the following information!

I. The Second-in-command: Angmar Witch-King

The Witch King of Angmar in the Lord of the Rings is one of the most fearsome villains. He is also known as The Lord of the Nazgul, led the Nazgul and was Sauron's second-in-command in the Second and Third Ages. His true identity is unknown; once a mortal king of Men, he was corrupted by one of the nine Rings of Power, becoming an undying wraith in the service of Sauron. He is not only the leader of the Nazgul and Sauron's forces but also has extremely terrifying energy that streak into the hearts of men and elves alike. Being the most terrible of the Dark Lord's cruel servants, only the White Wizard is adequate foe for him. He was the one to stab Frodo with a Morgul blade on Weathertop and even destroyed Gandalf's staff during an extended scene in The Return of the King.

He was surrounded by an aura of fear, enough to make trained soldiers and horses run in terror. He was a masterful duelist and warrior, able to slay even mighty foes, or slaughter lesser men. Not many people know the fact that he is already 4,200 years old. The Witch King served Sauron for over 1000 years before the Dark Lord was defeated by Isidur in the Battle of the Last Alliance. His age sounds terrible, but there were actually some creatures that appeared before Middle-earth existed and lived to be over 50,000 years old. Fortunately, a 3D printed Angmar Witch-King figure really does not look like a 4000 years old undead warrior.

The Witch King of Angmar figure is very imposing, partly thanks to the crown on his head. To distinguish him from other Nazguls, he is equipped with large armor and a helmet with spikes. When his cape is blown off, he is depicted as wearing a king's crown and flaming eyes on his invisible head. Due to safety standards, the points of his crown should be made round, resulting in something that reduces the aesthetics of the figure. Because of the parallel existence between life and death, The Angmar Witch-King is not at all in a fixed form. And so were the Nalguls, who had faded from their physical form after wearing the rings Sauron had given them. Only those who wear the Lord's Ring can see the shapes of these creatures, who appear pale and fuzzy in white robes. And the team that always chased Frodo to get the ring back were just black cloaks and no one could see what was behind the black shirt.

A typical Witch King of Angmor figure often wears a black robe or in strange armor. The Witch-King has a decent selection of joints, but is admittedly a little hard to pose, mostly due to the heavy robes covering him. This cloak cannot be removed because this is his defining feature. Wearing strange armor is what makes a Witch-king of Angmor figure has a mysterious look. The assembly will be quite complicated and take a lot of your time. But if you decide to download and assemble this 3d printed Witch King, the results will surely amaze you. Fire has always been his Achilles heel. In the novels and movies, the Angmar Witch-King's power is weakened by fire. Knowing his weakness, Aragorn burned their cloaks with fire in an attack on the ancient clock tower. However, throughout the film, the audience can also see that the Witch-King is not blindly afraid of fire, even trying to use them to "fire" his sword. And as mentioned above, the Witch-King's eyes are always full of fire.

In films and game adaptations, the Witch-king's primary weapon is his fiery broadsword. It is seen in the game The Lord of the Rings: The Third Age, while attacking Eowyn and Berethor’s army. Some Witch King of Angmar figures are designed to hold a flaming sword. This is one of the most popular Witch King 3D printed models in recent years. You can seach The Witch King Sword of Terror to download this magic sword model.

In addition to the fiery broadsword, the special mace that can burst shields or kill enemies in just one slash is also one of his main weapons. In the movies, the Witch King of Angmar uses a flail instead of a mace, but with the same effectiveness.

Some Witch-king designs had action features with the button on his back (which is quite well hidden, it should be noted) pressed, his right arm swings up and down, to either flail the mace or slash the sword, depending on how you have him armed.  Witch King of Angmar flail consists of three parts which you will need to assemble (a flail handle, a chain, a flail head). Add charm to your house with one of these cute crafts! The Witch King's smallest- yet still potent weapon is a Morgul blade, a deadly weapon that could slowly turn victims into a lesser wraith slave to the Nazguls and Sauron. Frodo was once a victim of this terrifying sword and almost merched into eternity. Fortunately for the hobbit, as Frodo was promptly brought to Rivendell and healed by the ministrations of Elrond.

V. The Witch-King’s Power and Abilities

In the novels, the Witch King of Angmar is described as having the ability to break weapons or kill opponents even when they contact his body. This was so severe that it was worse than a blow from his mace. Moreover, he can be death threats with just his voice. This explains why Aragorn used his torch instead of his sword while facing off against Nazgul on Weathertop.

The Witch King of Angmar was stronger at night time. Because the power of the Nazguls was largely based on fear, the time when humans became most fearful was at night, the Witch-King 's power increased from there. That is the main reason for them to hunt only at night.

One reason the Witch-King's power was so erratic during his time in Middle-earth is likely that his power was bound by Dark Lord Sauron. Since Black Captain became one of the Nine Rings, his power depends entirely on Sauron. The more powerful Sauron became, the more powerful the Witch King of Angmar became. One of the reasons he and the other eight Nazguls were so determined to track down Frodo was because their power would increase dramatically if they took the One Ring back to their master. If you already have a model of The Witch King of Angmar figure, what you should do right now is adding The Dark Lord Sauron figure to your collection. Put them side by side, the power of The Witch King will surely grow by leaps and bounds!

VI. The mystery of The Witch King of Angmar's death

As the leader of the Nazgul army, just thinking about it makes everything around you afraid, but there are still things in Witch-King that we don't know. He is described as neither alive nor dead, making him one of the most difficult enemies to defeat. In reality, the Witch King of Angmar can never be completely destroyed, he just disappears until he regains his powers.

And after all, he was still a survivor. In The Return of the King, the Witch-king is said to have been defeated by Eowyn and Merry. This information is even more certain because The One Ring was destroyed and his power disappeared too. Some people believe that he is the one who can never be destroyed and he is neither alive nor dead. After the decisive battle, no one heard his name again, it is possible that he and eight other Nazguls went to other lands to rule without obeying Sauron's orders. As terrifying as it looks, the Witch-King isn't always as powerful as we might think. He only appeared and destroyed the opponent with his magic and fearsome appearance and did not use physical strength on the battlefield. Even Aragon could manage to fend off the Witch-King and the Nazguls alone on Weathertop. In other words, his greatest strength is magic and fear. He can destroy all enemies but his strength is not equal to Gandalf the Grey.

Above is some information about The Witch King of Angmar. It can be an amazing 3D printed figure idea for your collection. If you like Witch-king and want to add this figure to your space, or if you want to surprise your guests, let's download and assemble them right now!

In addition to Witch King of Angmar, you can also refer to: Top 9 most special 3D printed statues.